STEPS co-founder Sara Hall competes Friday, October 28, in the 3,000m steeplechase at the 2011 Pan American Games in Guadalajara, Mexico!  In the midst of final preparations for the race, she drafted this update for STEPS runners, volunteers, and supporters.

“It seems like forever since I wrote my last blog posting.  Perhaps it’s because life has been a complete whirlwind since then!  Here’s a recap of the past few months…

“From racing at least twice monthly during the Spring track season, Ryan & I headed over to Europe for three weeks of racing, which was followed by a return to altitude and a chance to regroup in time for some Fall races.  I thought this would be a chance to relax and catch my breath, but I ended up moving us out of our house in Mammoth Lakes, CA, and into a rental home in Redding, CA, where we’ll do our sea level training the rest of the year and into 2012.  In the midst of a few Fall road races on the East Coast, Ryan & I started a school of ministry at a church in Redding while getting settled and getting him ready for the Chicago Marathon.

“Chicago was truly a memorable weekend!  It’s always an exciting atmosphere at Ryan’s marathons, and it’s especially energizing when we have a team of STEPS runners.  We were blessed with a great group of individuals — some of whom are profiled on the STEPS website — including my mom, who ran her first marathon!  It was a new experience for me to have two family members running the marathon, and I have to say: I was more nervous for my mom than for Ryan!  She just started running two years ago and had run only two half marathons before deciding to take the plunge at age 56. 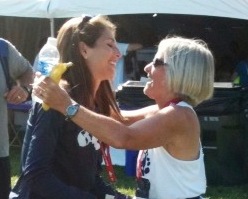 “When my mother first considered running a few months ago, Ryan & I assured her that she could do it — that anyone can do it.  I learned a lot in the months to come of what the marathon is like through the eyes of a beginner.  Ryan & I take for granted the little things we’ve learned over the years, but seeing the process through my mom’s eyes reminded me of just how daunting it can be for a first-time marathoner.

“I felt blessed to experience the thrill of that first victory with her as she walked (not even hobbling!) into our STEPS tent in Charity Village.  I was able to run a few miles with her after Mile 20 and was amazed at how she kept trucking along, passing people left and right.  It really hit me, too, when I saw her final time of 5+ hours.  I thought, “My mom, the person who never ran all those years while I was at home, just ran over twice as long (in time) as I’ve ever run!”  Needless to say, our family is so proud of her.

“I am equally proud of Ryan.  I had the good fortune of riding on the lead truck and watching almost his entire race, and I was able to pray for specific things as he ran.  Considering the warmth that day, I thought it was a very solid run.  Ryan’s consistency at the marathon — an event that, as Coach Vigil said, seems to be “like a rose with lots of thorns” — really amazes me. 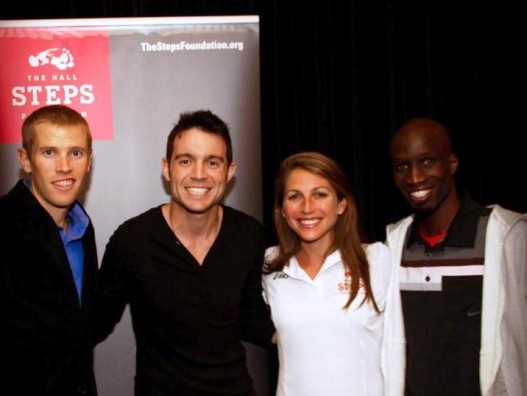 “Ryan was the most peaceful I’ve seen him in the weeks leading up to the race.  More than that, he seemed to be in the best place emotionally and spiritually than I’ve ever seen him.  To me, that means the most: I know that God has him right where he wants him to be.  It’s been so cool to see him experiencing God daily.

“We had an incredible time celebrating the Chicago Marathon with our amazing STEPS team — both in Charity Village immediately following the race and at our post-marathon dinner at Petterino’s.  One of the highlights for me was getting to hear Wesley Korir — second place at Chicago! — share stories from his young life in Kenya and tell us why he is so motivated to build the hospital that STEPS is helping to fund in his hometown.  He has a neat heart, and it’s been so fun getting to know him this year.

“Ryan recovered very well from the race, which was a huge priority with the Olympic Trials right around the corner.  He did a little speed work with me to loosen up his legs over the weekend, and he’s gotten in some altitude training this week in Guadalajara, Mexico.  Ryan & I are here for the 2011 Pan American Games, where I’ll be competing in the 3,000m steeplechase on Friday, October 28.  For those that aren’t familiar with it, the “Pan Ams” is basically the Olympics for North, Central, and South America.  It has a variety of events, from archery to swimming to track & field.

“I’m really looking forward to this opportunity to practice championship-style steeplechasing!  I’ve done more hurdling practice this summer and feel like I’ve made some gains — I’m excited to see them translate to the race.  It’s the longest track season I’ve ever had, but it’s been a really good experience to figure out how to recycle my training to prolong the season — even when I am feeling tired in June and July.

“It’s wonderful to be here in Mexico.  I’ve always had a love affair with the country since my high school days — I would travel here with my youth group to serve every Spring Break.  It was my favorite week of the year, playing and building bonds with kids that lived in poverty.  I’d get very attached and not want to leave when the week came to an end!  Those trips constituted my first experience with poverty outside U.S. borders.  They were the groundwork for my eventual decision to dedicate my life to justice in developing countries and establish The Hall STEPS Foundation.

“I love Mexican culture and am excited to explore another part of this beautiful country!  I’ll be sure to write an update after my race (Friday, October 28).  Ryan & I head straight from Mexico to Washington, DC, for appearances at the Marine Corps Marathon on October 30, after which we’ll be in New York City to support a few STEPS runners in the marathon on November 6.  Also, I’ll be running my last race of the year — a 5k — in New York the day before the marathon.  Hope to see some of you there…  Hasta luego!”  — Sara